This page is dedicated to sharing the knowledge from experience from other North Shore riders to help you find the best route for you. This page is a work in progress. If you have an idea for a route or shortcut to be added please contact us.

Metro Vancouver publishes cycling maps. Google Maps has a cycling option when looking for directions. Google's quality of the data (bike routes and trails) shown for the North Shore is getting quite good. There is also an online cycling route planner developed at UBC. Be aware that on the North Shore some of the mapped designated bike routes have gaps or no cycling infrastructure. The maps also do not show many of the short cuts, easier and safer routes that local cyclists use, which is why this page was started.

The videos below show a few routes on the North Shore from a cyclist's perspective. The Low Level video shows the former Low Level Road next to the train tracks. Designated bike routes

I've experimented with many routes to make this journey and have finally found what I consider to be the best route. It uses several non-car paths to gain advantage and has a steady but decent grade. Details are on a separate page

Following the example set by the establishment of the Village Walk in West Vancouver, it is proposed to designate and mark with appropriate signage a Village Bike Loop. The proposed route would connect five public schools and most of the public facilites, including five parks and the Community Centre within the Ambleside and Dundarave communities. Also, it would connect to the Spirit Trail and link to the bike route along the Upper Levels Highway. It would become an integral part of the West Vancouver Cycling Network.

A map showing the proposed route of the Village Bike Loop is shown below: 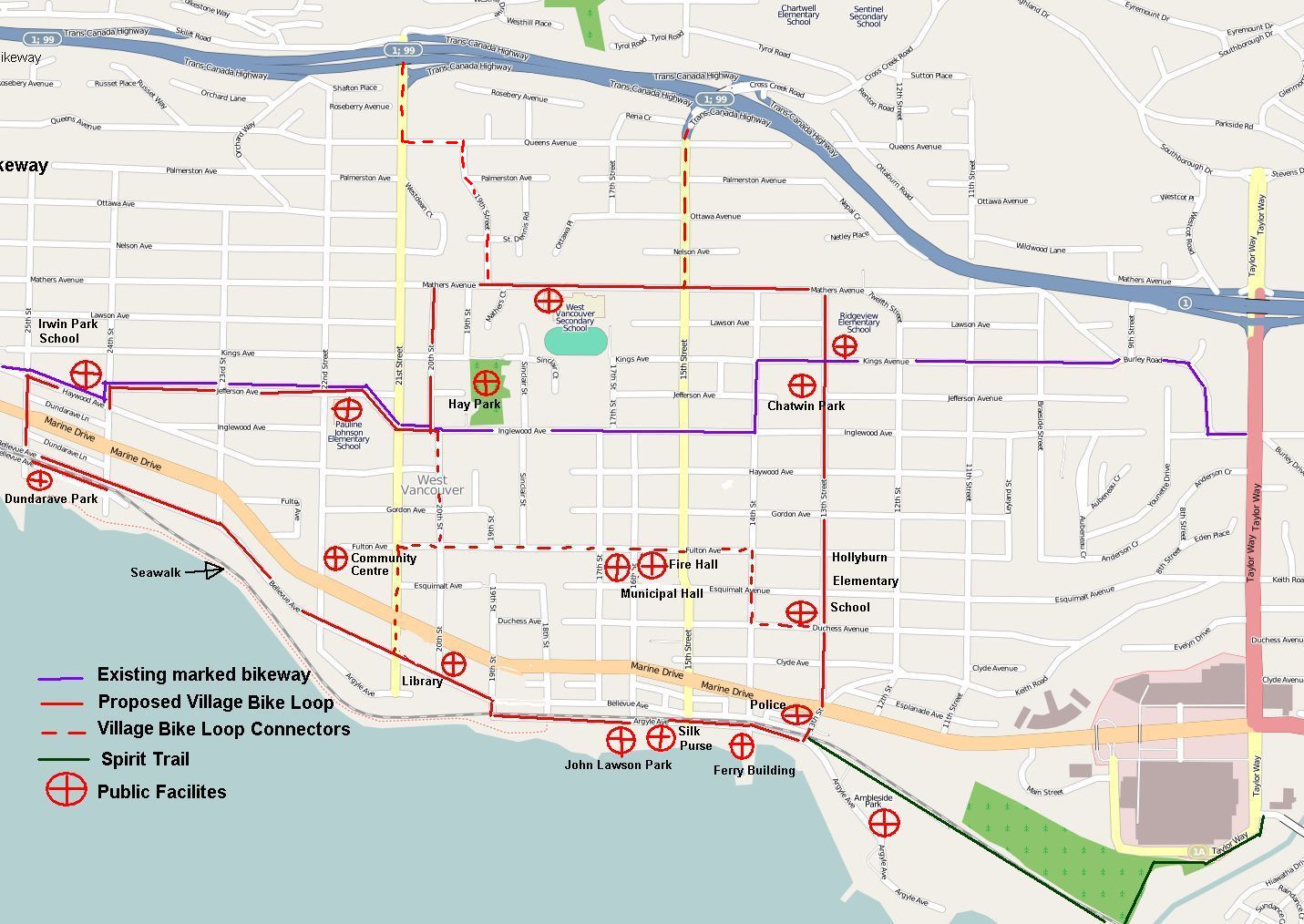 For travel between Lynn Valley and Upper Lonsdale or Westview, this trail is ideal. It can get a little treacherous in rainy season and overgrown in the summer, so be careful on it. The trail itself hugs the Upper Levels highway from near the tennis courts at the south end of Tempe Glen and dumps you out on the sidewalk at the east end of 25th St.

There's a tunnel under the Upper Levels Highway at the top of Phillip that is an easy way to get from Pemberton Heights to Capilano Highlands and vice versa. Beware of the speed checks midway through the tunnel!

Now that the bike lanes on Capilano Road are completed (July 2011) one can cycle between Pemberton Heights in North Van and the Lions Gate Bridge and the Spirit Trail in West Van as is shown on the following map: 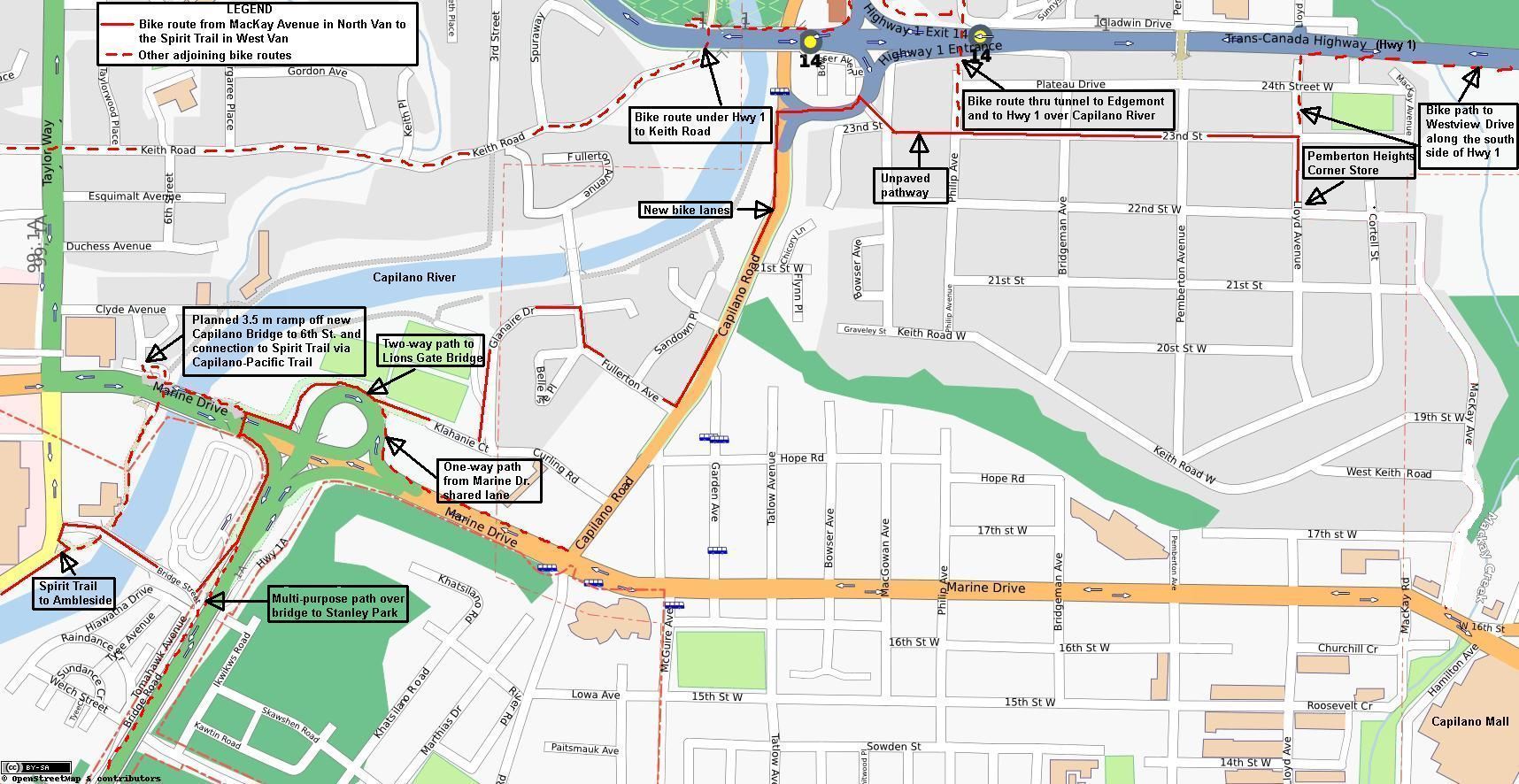 A very convenient trail connecting W Keith Rd near the Capilano Rd Hwy 1 ramps to W 23rd St in Pemberton Heights. For riders needing to continue east after coming off the freeway this is perfect. Also makes up a key part of the Lions Gate Bridge to Lonsdale & 27th route.

25th St makes an excellent route connecting Lynn Valley/Upper Lonsdale and Westview. At the west end is paved trail that leads up to Westview Dr. This is also a key connector on the Lions Gate Bridge to Lonsdale & 27th route.